As a leading service provider in the field of drug discovery and research, BOC Sciences can provide you with high-quality fluorescent probes and multiple markers in the same molecule. Each labeled probe service is strictly monitored in accordance with our strict quality assurance and quality control standards to optimize the ratio of markers to biomolecules.

Fluorescence labeling technology refers to the use of fluorescent substances using its fluorescence characteristics to provide the information of the object to be studied. Fluorescent labeling has the advantages of no radioactive pollution and easy to operate, which makes fluorescent markers more and more widely used in many research fields. The most commonly used fluorophores are fluorescein isothiocyanate (FITC), rhodamine derivatives (TRITC), coumarin and anthocyanin. These synthetic organic dyes are used to label biomolecules as proteins, peptides, antibodies, nucleic acids, bacteria or yeasts.

Below is a list of our fluorescent dye labeling (include but not limited to the following):

Labeling peptides with fluorescent dyes or other markers provides a powerful tool for the study of biological-related interactions, such as receptor-ligand binding, protein structure and enzyme activity.

As the preferred reagent for flow detection, fluorescent labeled protein can be detected by one-step staining because it is pre-labeled with fluorescein group, which not only simplifies the detection process and saves detection time, but also avoids the non-specific background caused by the use of secondary antibodies.

The fluorescent labeling of nucleic acids is usually carried out by enzymatic reaction, and the chemistry of organic fluorescent groups is introduced into primers or nucleosides of triphosphate. Fluorescence-labeled nucleotides have many advantages in the study of gene qualitative, quantitative, integration and expression. At present, it has been widely used in genetic disease diagnosis, virus infection analysis, prenatal diagnosis, tumor genetics, genome research and many other fields.

In enzyme labeling, the DNA of genes and fluorescent proteins is first used to form DNA constructors. Heterozygous RNA+ fluorescence was formed after transcription. The object of interest connects to an enzyme that recognizes the heterozygous DNA. Fluorescein or biotin is usually used as a fluorophore. 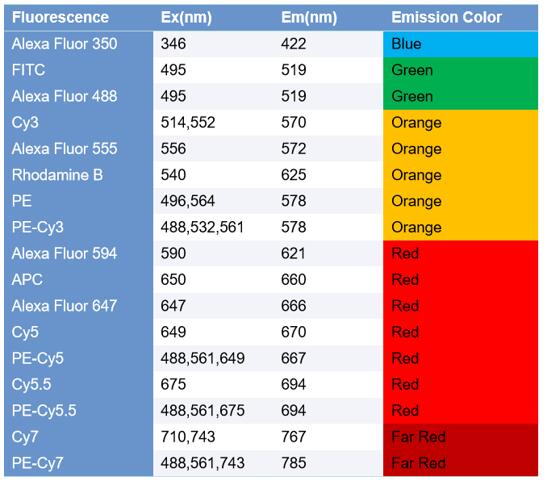