The professional team of BOC Sciences wholeheartedly provides customers with various types of chiral catalyst customized synthesis and related services. Our services are comprehensive, the process is efficient, and the finished products are of high quality and efficiency.

There are three ways to obtain chiral compounds including resolution of racemic, chiral synthesis based on substrate induction and chiral catalytic synthesis. Among them, chiral catalytic synthesis is the most effective method, which can achieve chiral proliferation. A highly efficient chiral catalyst can induce the production of chiral product molecules ranging from thousands to one million, even exceeding the level of enzyme catalysis in quantity. Chiral catalyst can achieve highly efficient and enantioselective catalysis of the target reaction, which has to be well-tuned to make a perfect match between metallic ions, chiral ligands, additives, substrates and so on. In additions, the catalyst can be recycled, and its composition, property and quality will not change before and after the reaction. The relationship between the chiral catalyst and the reaction system is just like the relationship between a lock and a key, which is highly selective. Each chemical compound is synthesized by different kinds of chiral catalysts.

Chiral metal catalysts are applied in the synthesis of some important natural products and pharmaceutical intermediates because of their high stereoselectivity, high catalytic activity and enantioselectivity. Chiral metal compounds can be used as catalysts for a series of reactions, such as Asymmetric Cyanation reaction, Henry reaction, and Michael addition reaction. Commonly used metals include copper, ruthenium, palladium, iridium, cobalt and so on. In addition to resolution methods such as chromatographic separation and stepwise crystallization of diastereoisomer salts, the common catalytic methods of chiral metal catalysts also include asymmetric synthesis methods, which can stereoselectively prepare chiral metal catalysts.

Biocatalysts are cells or enzymes, which are known as the mildest and environmentally friendly catalysts. With the characteristics of high purity, high efficiency and selectivity, and mass use, biocatalysts can be used to synthesize many chiral compounds such as chiral pharmaceuticals and pesticides.

The synthesis of magnetic nano-catalysts is generally through chemical bonds or coordination bonds, so magnetic nanoparticles are used as carriers to combine with a variety of traditional catalysts. With the development of chemistry, nano-catalysts are widely applied because of their high surface-to-volume ratios, high activity and high surface energy. Due to the small particle size of magnetic nanoparticles, the nano-heterogeneous catalysts can achieve similar or even higher activity compared with the homogeneous catalysts. Moreover, they can be reused after separation from the reaction system by using a magnet and simple regeneration process.

A spectacular progress in asymmetric catalytic reactions based on metal-free organic molecules has been witnessed. The catalytic reactions of small organic molecules have been powerful tools in the construction of complicated compounds. The synthesis of chiral organic small molecule catalysts can be designed based on natural chiral pool (such as amino acids, alkaloids) or other asymmetric synthesis methods. 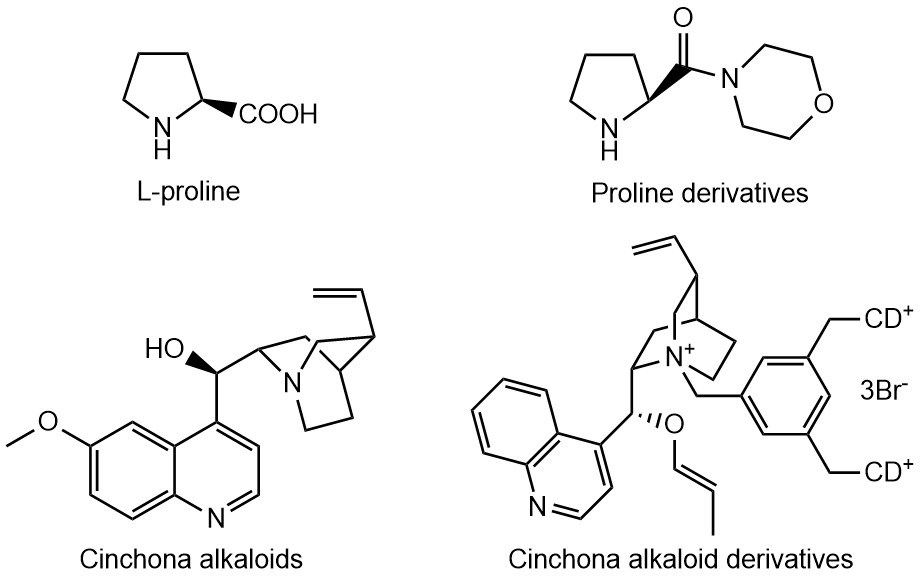 BOC Sciences is proud to provide you with various chiral catalysts to help you synthesize your desired compounds. Our experts and chemists have rich experience and are professional in a wide variety of synthesis pathways. In addition, various techniques and a dedicated custom synthesis team are capable of synthesizing compounds in a short time.