Antibody-drug conjugates (ADCs) are composed of monoclonal antibodies targeting specific antigens and small-molecule cytotoxic drugs linked by linkers, which have both the powerful killing effect of traditional small-molecule chemotherapy and the tumor targeting of antibody drugs. Up to data, 14 antibody-drug conjugates (ADCs) have been approved for the treatment of various cancers, and approximately 100 ADC candidates are in clinical trials worldwide.

Over recent years, studies have found that the site-specific ADC drugs formed by quantitatively coupling small-molecule drugs to specific sites of antibodies have better therapeutic index, and have gradually become the focus of research and development in the field of ADC drugs. However, due to the complex amino acid composition of antibodies, site-specific conjugation of small-molecule drugs by chemical methods has always been challenging. Among them, ligand-directed site-specific coupling technology is a potential method, but the difficult release of redundant ligands or the complex release process limits the application of this technology in site-specific ADC drug development.

Recently, Huang group from Shanghai Institute of Materia Medica Chinese Academy of Sciences developed a novel ligand-directed acylation reagent based on a thioester structure, which can automatically release redundant ligand structures while site-directed modification of lysines at specific sites of antibodies, and realize "one-step", "no trace" preparation of site-directed antibody drug conjugates for the first time by chemical methods, providing a novel preparation for the development of targeted ADC drugs. 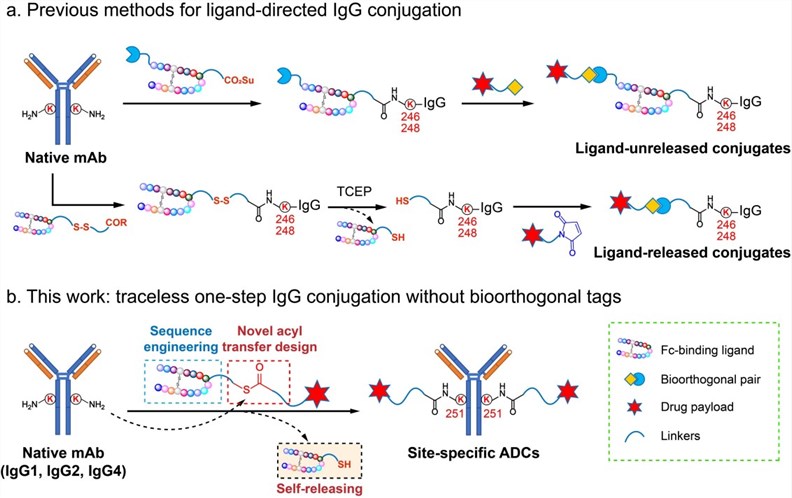 Fig.1 Previous multi-step approach for ligand-directed chemical modifications of IgG(a) and current traceless approach for one-step synthesis of site-specific ADCs using a novel acyl transfer design and a sequence engineered Fc-binding ligand(b). K248 in panel a based on EU numbering is the same residue of K251 in panel b, numbered based on Trastuzumab sequence.

The research team applied this technology to realize various forms of functional molecular modification, such as the "one-step" site-specific azation, biotinylation and various small molecule drugs, all of which were specifically coupled to two molecular compounds. This traceless method has demonstrated excellent efficiency in one-step IgG conjugation with various cargoes including azide (Fig.2), biotin (Fig.3), toxins (Fig.4), etc. Analysis methods such as high-resolution mass spectrometry and mass spectrometry proteomics have proved that the small molecule modification occurs at the targeted site in the Fc region of the antibody, with extremely high site selectivity. 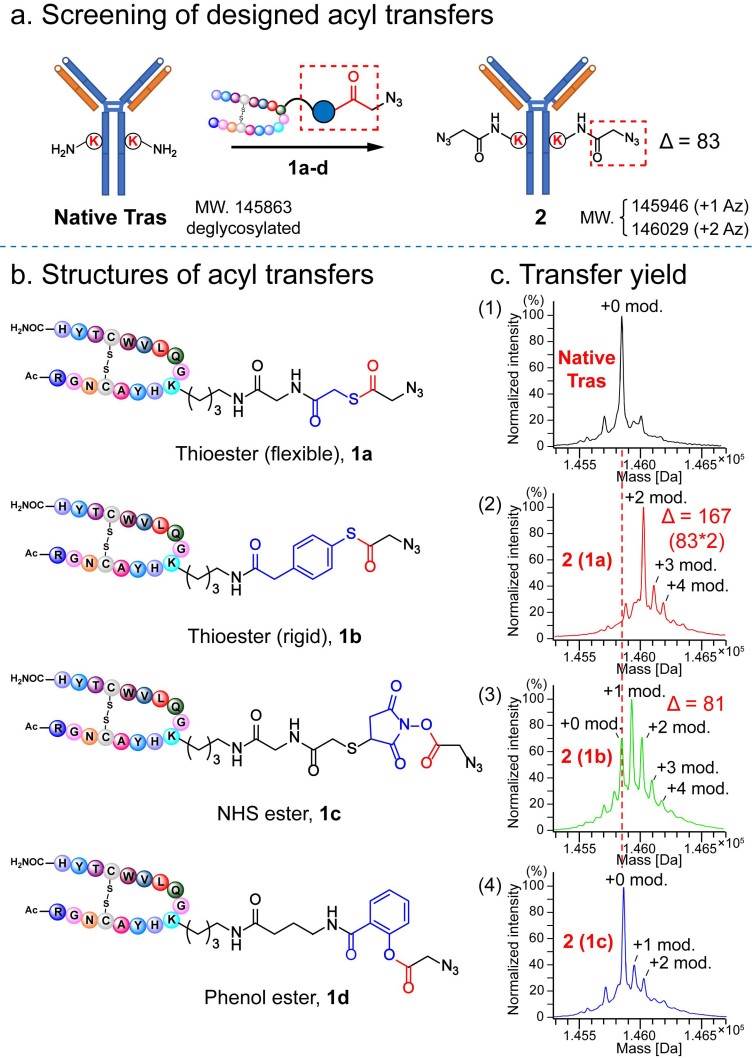 Fig.2 Screening of designed acyl transfer reagents. (a) schematic for onestep and site-specific azidation of Trastuzuamab. (b) structures of designed acyl transfers. (c) LC-MS analysis of Az-Tras 2 after incubation without (1) or with 1a (2), 1b (3), 1c (4). All antibodies were predigested with Endo-S to remove the heterogenous N-glycans before LC-MS acquirement. 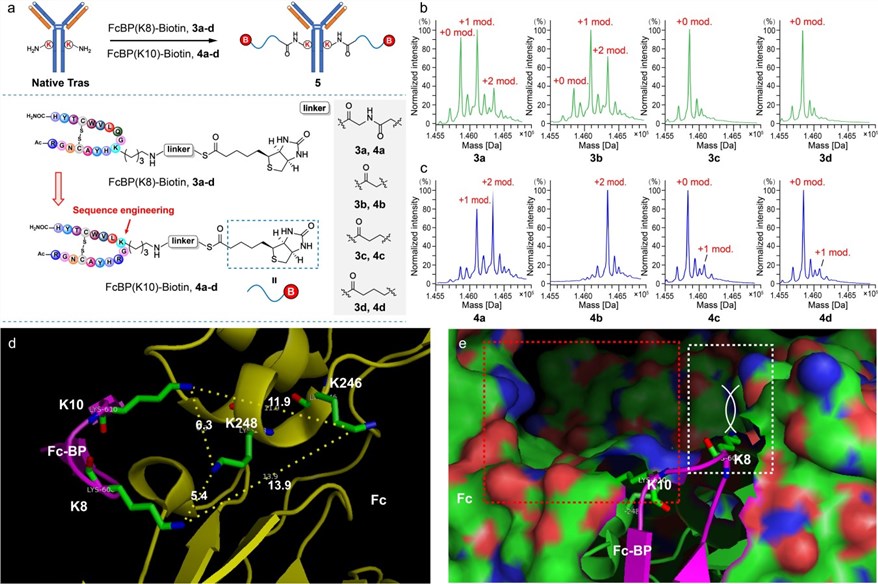 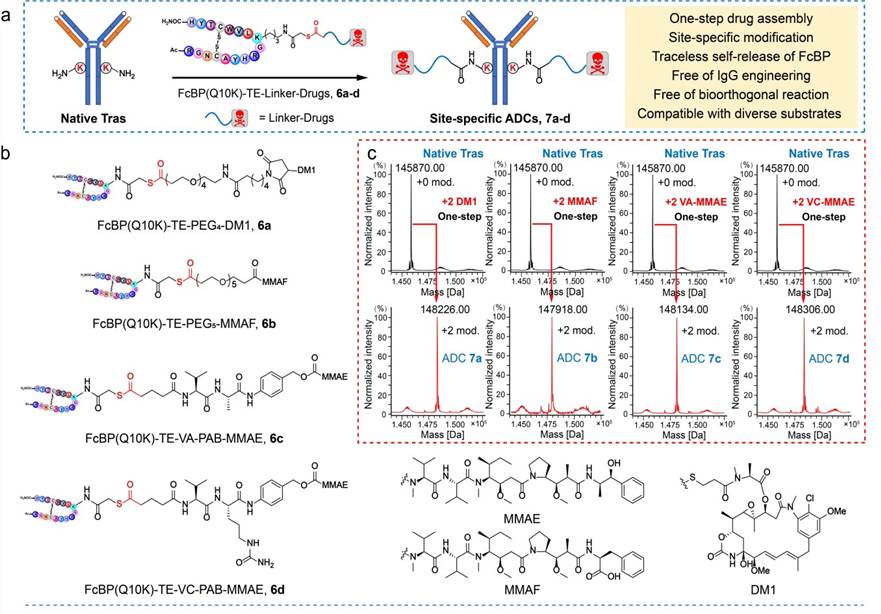 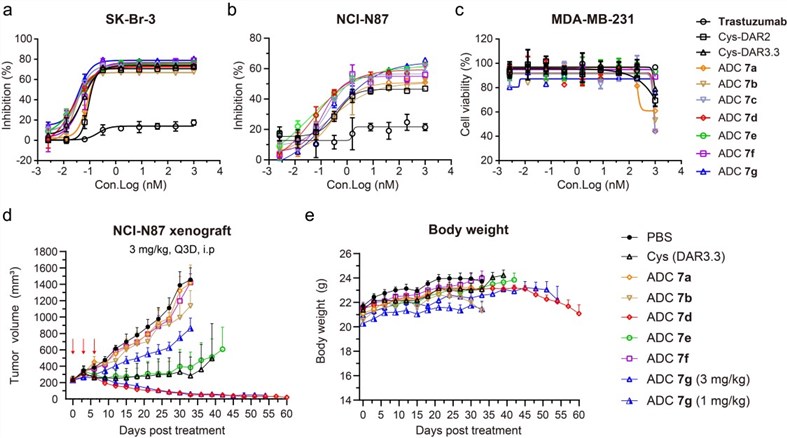 Fig.6 Evaluation data of in vitro and in vivo anti-tumor activity of site-specific ADC drugs.

In conclusion, the research team has realized the "one-step" and "no trace" site-specific quantitative modification of lysine at specific sites of natural antibodies by designing novel acylation reagents and optimizing the structure of ligands. For the first time, this technology realizes the efficient and uniform preparation of site-directed ADC compounds by chemical means without the need for antibody engineering and bioorthogonal reactions, and is compatible with diverse substrate structures and antibody types, which exhibits broad potential applications in ligand-directed protein modifications.