Targeted and focused libraries are collections of compounds used to interact with a individual protein target or with a series of related targets such as kinases, ion channels, and proteases. Through computer virtual screening technology such as molecular docking, pharmacodynamic group modeling, machine learning and similarity search and other calculation methods, the professional team of BOC Sciences can provide diverse targeted and focused libraries, and can also provide custom services according to customer needs. Our services are your good assistants for studying the pathogenesis of diseases, the mechanism of drug action and the induction of cell differentiation.

Targeted and focused libraries are used to screen therapeutic targets to find hit compounds that may further develop into drugs. The design of targeted and focused libraries usually utilize structural information about target or target families. If no such structural information is available, chemical genomic models combining sequence and mutagenesis data can be used to predict the nature of the binding site. When no structural data is available, the third method usually used is to use the properties of the target ligands to obtain focus libraries from them by scaffold hopping.

Target-based high-throughput screening is an important strategy for new drug screening. Targeted libraries contains drug-like molecules, including GPCRs, kinases, proteases, ion channels, nuclear receptors, epigenetic libraries, etc. These libraries are characterized by higher screening possibilities for compounds to prove that they are active against targets within a given class and have a high degree of structural diversity. Whether you are studying "difficult" targets related to cell processes, or studying signal pathways and a wide range of biological targets, or studying protein interactions and overall treatments, you can use targeted library screening to achieve multiple applications of libraries.

Focus libraries can be designed from richer and more diverse collections by methods such as in silico docking to targets or or calculations based on molecular fingerprint similarity. These libraries are similar to the reference sets of known compounds, and their target activity is consistent with the data retrieved in literature and annotated compound databases. Focus libraries contain key libraries of small molecule compounds with potential biological activity against certain diseases and libraries with specific uses, including antiviral research, antibacterial research, anticancer research and CNS property space, etc. 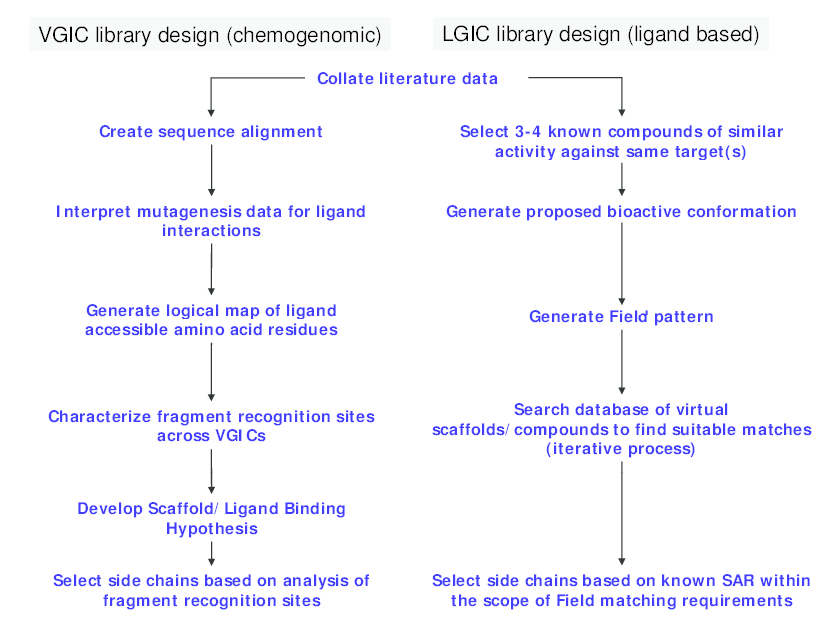 BOC Sciences provides customers with diverse targeted libraries (include but not limited to the following):

The GPCR library is designed using a series of GPCR-related scaffolds and can be used to discover GPCR-based drugs, which is the most abundant signal receptor target in drug discovery. The GPCR library contains small molecules associated with the receptor.

Kinases are essential to many stages of cell life. They are a broad class of enzymes that catalyze phosphorylation, which affect the reactivity and binding properties of substrates and regulate energy balance. The kinase library is designed to modulate biological targets while complying with standards of similar or lead-like drugs.

Ion channels are membrane proteins expressed in almost all living cells and are one of the most important targets for the treatment of many different pathophysiology. We used a variety of tools to predict ion channel blockers between compound collections, thereby designing an ion channel focused library (fingerprint similarity). Ion channel targeted libraries are designed through receptor-based methods.

Proteases are a class of enzymes that catalyze the hydrolysis of proteins. According to the way they degrade polypeptides, proteases are mainly divided into two types: exoproteases and endoproteases. The former cleaves the peptide bond at the end of the polypeptide chain, and the latter cuts the peptide chain internally. Protease is involved in various physiological processes and is a potential drug target for various diseases such as cardiovascular disease and cancer.

There is growing interest in medium and large macrocyclic compounds closely related to the field of protein-protein interaction (PPI) . With increasing attention to all aspects of protein-protein interaction (PPI), we have designed a proprietary collection of potential PPI modulators for drug discovery through ligand- and receptor-based approaches .

Nuclear receptors are one of the most abundant transcription regulators in multicellular organisms. They play important functions in metabolism, sex determination and differentiation, reproductive development and homeostasis maintenance. Based on the fingerprint similarity of compounds with anti-nuclear hormone receptor activity, nuclear receptor libraries were selected and designed.

Polycyclic compounds in which two monocyclic rings share one carbon atom are called spiro compounds. There are many spiro compounds in nature, some of which have been used in biomedical research and used as scaffolds for new therapeutic agents. Based on the spiro ring skeleton, spiro libraries have designed new compounds with 3D characteristics.

Anti-cancer is to treat malignancies or cancerous growths by using anti-cancer drugs or combination of drugs and other treatments such as radiation therapy and surgery. In 2003, a new technique was developed to search for effective anti-cancer drugs. The researchers selected more than 23000 compounds through screening techniques to kill cancer cells while keeping healthy cells free from harm. The system identified 9 compounds, including a previously unknown anti-cancer drug, which is an important factor for fighting cancer.

Antibiotics, also known as antibacterials, are antibacterial drugs used to treat and prevent bacterial infections by killing or inhibiting the growth of bacteria. A limited number of antibiotics also have antigenic activity. Antibiotics are ineffective against viruses such as colds or influenza. Drugs that suppress viruses are called antiviral drugs, not antibiotics. In modern society, most antibacterials are semisynthetic modifications of natural compound.

Antituberculosis drugs for treating diseases caused by Mycobacterium genus, including tuberculosis and leprosy, have been affecting mankind since ancient times. Combination chemotherapy is critical for killing heterogeneous bacterial cells and preventing resistance within the host under different conditions.

All the compounds contained in BOC Sciences's existing targeted and focused libraries are of high quality, optional exclusivity, and fast and reliable hit tracking. Through selection, a set of compounds that best suit the researcher's research method can be constructed. Customers can also customize compounds according to specific requirements.