Organic azide compounds contain azide-based high-energy reactive functional groups and are an important class of organic synthesis intermediates and target compounds, which are widely used in organic synthesis, chemical biology, functional materials, and clinical medicine. These compounds are from azide reaction. The azide reaction introduces an azide group (N3) into the organic molecule, that is, N3 in the nucleophile replaces the halogen, sulfonate, nitroguanido, nitrate ester, etc. leaving group in the original compound. The reaction mechanism of azidation is nucleophilic substitution.

Below is a list of our Azide Synthesis Services (include but not limited to the following): 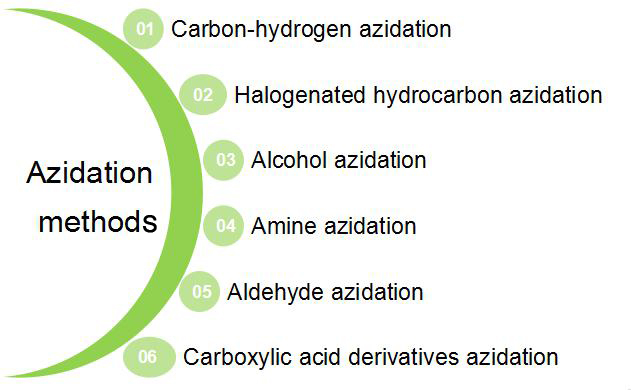 The direct functionalization of carbon-hydrogen bonds has the advantages of short reaction paths, high economic atomicity, and the concept of green chemistry. Under the action of ceric ammonium nitrate (CAN), the starting compounds can undergo azidation with NaN3. In addition, iodine azide (IN3) and olefins can also synthesize alkenyl azide compounds.

Sodium azide is a dipolar ion, and it can be directly reacted with a highly active halogenated compound to produce an azide, which has been widely used in azidation. The azidation of alkyl and benzyl halides with NaN3 is relatively easy, and the two can usually react directly to give the corresponding aliphatic or benzyl azide.

In addition to the preparation of azides by conversion to halogenated hydrocarbons or their sulphonyl ester intermediates, azides can also be directly subjected to azidation. Hajipour studied azides in N-methylpyrrolidone-based ionic liquids. In the synthesis of the compound, the alcohol reacts smoothly with sodium azide in the system into the corresponding organic azide compound, which simultaneously serves as a catalyst and a solvent.

The preparation of aryl azides by diazotization of arylamines is a classical method for the synthesis of these compounds. The reaction is usually carried out in two steps. The first step is the oxidation of arylamines to give diazonium salts, often using sodium nitrite as an oxidizing agent. It is carried out in a strongly acidic environment. The second step is the decomposition of the diazonium salt and further azide to give the target product.

Aldehydes can be directly azidated to give the corresponding organic azide compounds. This method has the advantages of high speed, easy operation, mild conditions, and high yields. The reaction can be completed in one step, and Curtius rearrangement is not easy.

The carboxylic acid derivative is treated with sodium nitrite under acidic conditions to give an acyl azide compound. The acyl azide compounds can be used to prepare amides, synthesize heterocyclic compounds, and can also be rearranged by Curtius to form isocyanate reactive intermediates, commonly used in the synthesis of amines, carbamates, and ureas.

BOC Sciences has high-quality equipment and reagents, and skilled technicians to provide you with professional azidation services. We are expert at designing the routine and using multiple techniques (NMR, LCMS, GCMS, and X-ray) to analyze compounds after the azidation synthesis completed.