Computer-aided drug design (CADD) is a method based on computer chemistry to design and optimize lead compounds through computer simulation, calculation and budgeting of the relationship between drug and recipient biological macromolecules. The method of CADD began in the early 1980s. The combination of Computer aided molecular modeling and rational drug design has developed into a large class of methods of CADD, which is a tool for new drug research. Nowadays, with the completion of the human genome project, the rapid development of proteomics, and the discovery of a large number of genes related to human diseases, the target molecules of drugs have increased dramatically. At the same time, computer-aided drug design has made great progress in recent years, driven by computer technology. 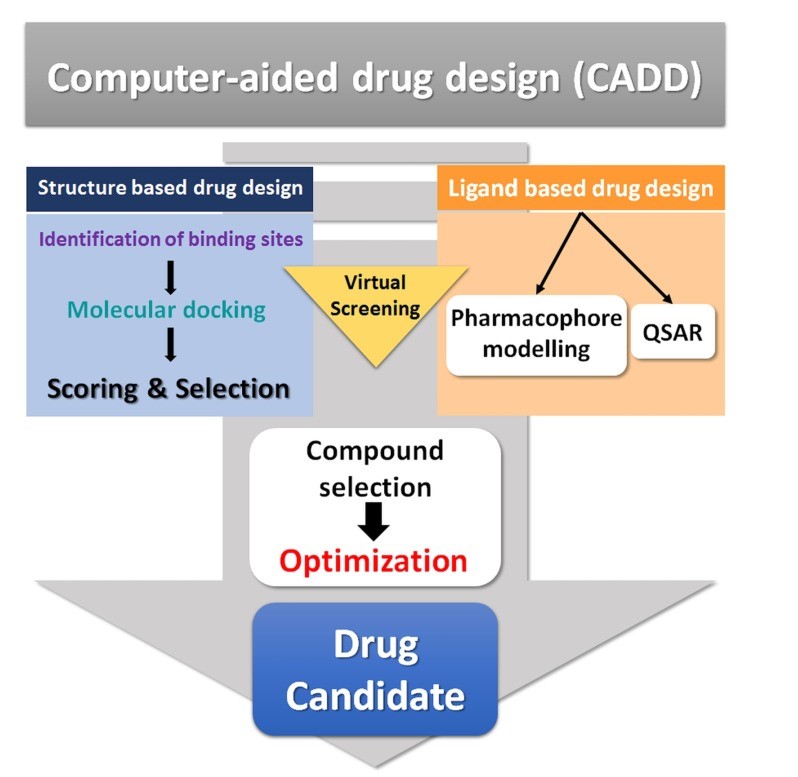 The structure of the binding site of the receptor macromolecule was obtained by X-single crystal diffraction technology, and molecular simulation software was used to analyze the structural properties of the binding site, such as electrostatic field, hydrophobic field, hydrogen bond site distribution and other information. Then, database searching or novel drug molecule design technology can be used to identify the molecules whose shape and physical and chemical properties match the receptor action site. After several cycles, new lead compounds can be found.

In the early stages of drug research, the large number of molecules to be selected in accordance with the expected specific biological activity can be reduced to a small number; It can help medicinal chemists to make selection and comparison, and provide more active molecules to be selected for further study. To study the receptor structure of drugs, determine the pharmacodynamic structure of drugs, and provide lead compounds for drug design. At the same time, CADD also has its unique advantages: building three-dimensional chemical molecular structure model on the display screen; Using the achievements of computer chemistry over the years; On the basis of the model, the characteristics of various molecules and the interactions between molecules were calculated (the positions of atoms determined by molecular crystallization were analyzed by X-ray diffraction using chem-x molecular modeling software; To obtain the three-dimensional structure model of protein molecules); Moving molecules around the screen at will (rotating around an assumed axis, flipping and moving towards a particular bond); It can calculate molecular properties (distance and angle between two atoms, molecular volume, surface area and shape; Electronic properties of molecules, hydrogen bonds, donor/acceptor or charged group properties); Look at molecular interactions, gene binding and so on.

Now in every new drug research work of a certain scale, the research of CADD is a basic work. Every big pharmaceutical company in the world is using computer technology and is committed to developing the technology, which has a broad application prospect.